Another year, and it comes to our attention that another new geological time scale is published in the form of GTS2016. This new work makes some 27 changes to stage boundaries compared to the previously published GTS2012. We have taken this opportunity to revisit our interpretation of the 2012 time scale and provide a 2016 version which shows the revised stage boundaries, and the resulting changes to the divisions further up the hierachy. We have also added more subdivisions where these didn’t exist before, e.g. the sub-epochs in the Cenozoic.

Because this new 2016 scheme has been created in StrataBugs v2.1, we have been able to add the boundary uncertainty indicator so you can see which are confident, probable or possible.

Users of Timescale Creator Pro may be able to import the new schemes directly from the data pack, but we have packaged the revised timescale so you can download your own copy and easily import this into StrataBugs. If you use the “Read…” button in the Schemes and Interpretations module, you can compare the new scheme on the Match Scheme dialog with the existing GTS2012. The match dialog shows you exactly which changes have been made: 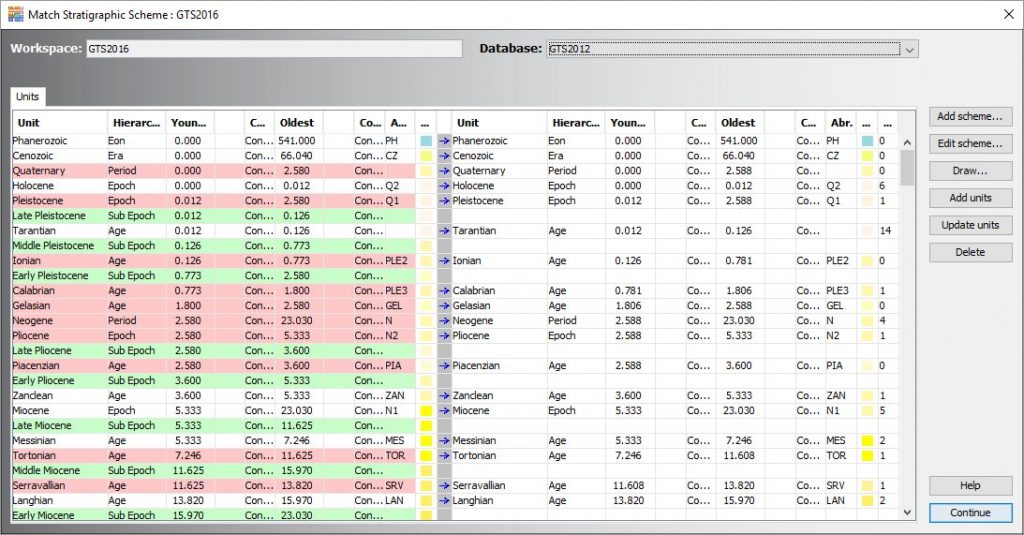 As usual, items in the workspace are on the left, and existing items from the database are on the right. Green rows indicate the new units. Red rows show where there is some kind of difference. Many of the differences are where we have added further precision to the boundary ages.

Once you’ve imported the new scheme, you will need to ensure that zone boundaries in your existing zonation schemes are in alignment with the updated time units. You can get StrataBugs to do the bulk of the work for you using the “Recalibrate…” button. This will create a copy of your scheme with zone boundaries adjusted in the same propoprtion as the change in the corresponding time unit from one scheme to another.

You can also relink existing well data intervals to a new scheme using the “Reassign…” button on the “show wells” dialog for the existing scheme. This procedure looks for units of the same name in the new scheme, and switches the well data to point to the new scheme. For a transition between GTS2012 and GTS2016 there should be a complete match of unit names. The implication of the reassignment is that the unit positions will change when plotting depth/age curves, so your depth/age curves might also need revisiting if you switch to the new time scale.

Unless you are actually using the time to calculate accumulation rates, or measuring time gaps in Wheeler diagrams, or exporting curves into another system, it doesn’t really matter which time scale you use; as long as all your schemes are consistent with it, there is no ambiguity as to which stratigraphic unit zones or events belong to. It is for this reason that in v2.1 you must specify which time scale a zonation scheme belongs to. You can also group the display of schemes according to the base chronostratigaphic scheme.